In the morning, the little one ran outside, grabbed me by the stem and said, “Good morning Mr. Pumpkin-umpkin.” I noticed she had a black marker in one hand and a knife in her other hand.

At first I was hoping she was going to use the knife to cut some pancakes or french toast for my breakfast, but the little one had other plans- plans which were not to my liking….She opened the marker and began to draw on me. First she drew some horrible looking eyes,

then she drew a nose that looked more like a triangle then something you breathe from, but the worst thing was the mouth. Yes, the mouth was horrible. It had these three teeth inside of it that looked as if I’d never brushed them, and believe me, I take extremely good care of my teeth.

Well the next thing I knew, the mother of the little ‘artist’ came out of the house, looked at me and said,
“What a nice face you drew, pumpkin.”
Pumpkin? Pumpkin? How dare she insult my whole family by calling this little brat, pumpkin!
“I don’t like the face!” yelled the girl.
“Why not?” asked the mother.
“It’s not scary enough.”
“I think it is pretty scary,” said mother.
‘I agree,’ I muttered to myself, ‘as a matter of fact, it’s one of the scariest things I’ve ever seen.’
“Well, you can make a new face on the OTHER side of the pumpkin,” suggested mother.
‘Great,’ I thought. Now I was gonna’ have two horrible faces on me! What did I look like, some kind of coloring book? This was my body they were messing with!
As the mother walked back into the house she said, “Let me know when you want to carve the face and I’ll come help.”

I figured if anyone even thought about carving me,
I’d scream as loudly as I could like 45 x 73 times.
How many times was I going to scream?

Enter the amount without a comma:

Go To Chapter 5
Back to Table of Contents 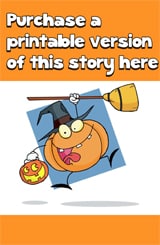